skip to main | skip to sidebar

Digging in the dirt...

When Kajira asked me to teach a "gothic" workshop at Tribal Fest this year, I didn't really know what to offer. I don't consider myself just a gothic bellydancer, although that seems to be the label that others often put on me. I don't mind, really; I do tend towards darker themes and costuming, so the label is understandable. However, despite being attracted to the darker side of things, I think my style encompasses more than "gothic". And as far as teaching any sort of authoritative workshop on gothic styling, costuming, or music, I could name several dancers and artists who are much more qualified to do so. I think the reason Kajira asked me to teach a "gothic" workshop is because my performance at Tribal Fest 8 last May was quite dark.

That performance was rooted in a lot of personal anger and frustration that I had been dealing with as an artist and as an individual. In order to perform that piece, I did a lot of introspection and soul-searching. The specific meaning behind the piece is, of course, personal. I had to face my fears, my insecurities, and my ever-present and often destructive Ego in order to work up the gall to share that with the world. I often describe that piece as "One girl confronting and conquering her demons."

The concept of personal demons has fascinated me since high school. Personal demons are the aspects of our own selves that we fear, that we don't want to accept, and that we don't want the rest of the world to see. They are our ugly parts, our sources of shame, anger, and fear. They are remnants of our past that we'd rather not remember, that we'd rather just push away. All of us have them, but only some of us choose to face them, and even fewer use them in our art. And the more you push them down, the stronger and less controllable they can become.

I believe the best art is made from the deepest and darkest demons. So, just as I had to reach deep inside my psyche to present my TF8 performance, maybe I can help others face, confront, and tame their darker sides, their Jungian Shadow archetype. I've also confronted (but by no means have I fully reconciled it--I'm not sure one ever does) my Demons and Shadow face-to-face several times in Suhaila Salimpour's workshops, particularly this past August during the Level III weeklong. I think I have some insight on how to use the darker aspects of ourselves to create a more powerful, more emotional, and more honest performance.

If we can't face the dark sides of ourselves, we will continue to never fully recognize our complete emotional range... and if we can't recognize our emotional range, how can we ever present a compelling performance to an audience who, whether they know it or not, are desperately seeking a connection with the artist on stage. The more you can face your demons, the more you can not only connect with yourself, but with every single person who sees you perform. And isn't making that sublime connection with others something that makes art ART?

Today, I'll leave you with this excerpt from Jung's writings on the Shadow.

We know that the wildest and most moving dramas are played not in the theatre but in the hearts of ordinary men and women who pass by without exciting attention, and who betray to the world nothing of the conflicts that rage within them except possibly by a nervous breakdown. What is so difficult for the layman to grasp is the fact that in most cases the patients themselves have no suspicion whatever of the internecine war raging in their unconscious. If we remember that there are many people who understand nothing at all about themselves, we shall be less surprised at the realization that there are also people who are utterly unaware of their actual conflicts.

I've been encountering the metaphor of dance as language recently... Mira Betz told us during one of her workshops here in DC that performing is like telling a story. Every movement should add to a cohesive whole. It's one thing to have beautiful technique, but if the movements don't flow well together and if they don't fit the music, then all you're speaking to your audience is gibberish.

Performing lots of beautiful technique without a story or without flow is like going up to someone and saying, "Conceptual lucrative implement ameliorate."

Sure, those are all difficult words that are cool on their own, but when you put them together, they don't mean anything. They're just a string of difficult words.

It seems that recently in the tribal fusion community dancers have been praising other dancers who speak individual words very well (i.e. executing particular movements cleanly and precisely) without tying all of them together into a larger, complete performance. It's like applauding someone giving a speech because they said, "ameliorate" really really well. But what did the word "ameliorate" have to do with anything they were saying? Were they saying anything at all?

This is, of course, not to say that clean technique isn't important. Of course it's important. But technique alone is not the essence of dance. One must look at their performance as a whole, a complete presentation that flows seamlessly from beginning to end.

I leave you with two articles from two dancers and artists I respect very much: Shems and Tempest. Both have written eloquent articles on the importance of a cohesive performance.


"Learning the Language of Belly Dance" by Shems

"The Age of Storytelling" by Tempest

Really, it comes down to every dancer has a story to tell. And if they can stop for a moment and consider what it is and what it means to them before they get on that stage, then it will show in their dancing.

Having a good vocabulary is one thing... knowing how to use it is another thing entirely.

If you've been reading this blog for a while, you'll know that I'm really into using visualization in my dance practice. I practice more in my head and in small increments than I do in the studio. (I don't recommend that for everyone, but I need to work with the time that I have!)

Several of my students have asked me about identifying and isolating the lower abdominals. For various reasons, the lower abdominals are very hard for many people isolate. Maybe it's because, as women, we're often told to "suck it in" and that our female parts are a source of shame or pain. Many women mentally and emotionally separate themselves from their lower abdominals, and any attention they pay the oft-neglected muscles is usually negative.

Regardless of why someone might have trouble accessing the lower abdominals, being able to access and isolate them is imperative in bellydance for clean pelvic locks, undulations, interior hip squares and circles, and plain old good posture.

Here are some tricks to help you connect your brain with your lower abs. Remember - your brain controls your body. Yes, that's sort of a "well, DUH" statement, but it's amazing how out of control our body feels when learning a new movement.

A bit about the abdominal muscles.

The rectus abdominis muscles are actually eight separate muscles. Their primary function is to protect the inner organs and to pull the torso forward. The human body is not normally expected to isolate the upper set of rectus abdominis from the lower set, so naturally, doing so is pretty difficult. 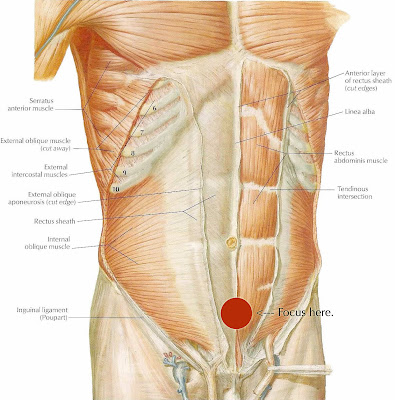 I hope this helps some of you identify and isolate your lower abdominals.... it may not come quickly. It's taken me years to be able to separate my upper abdominals from my lower abdominals, and I'm just now feeling like I can isolate them really well. If you work on this just a little bit every day, you'll have clean lower abdominal isolations in no time.

What's on my bookshelf...