skip to main | skip to sidebar

Some of you may have already seen this, but I read this today in Wired, from their article "12 Hacks That Will Amp Up Your Brainpower": 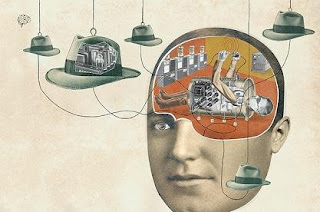 Learning new things actually strengthens your brain — especially when you believe you can learn new things. It's a virtuous circle: When you think you're getting smarter, you study harder, making more nerve-cell connections, which in turn makes you ... smarter. This effect shows up consistently among experimental subjects, from seventh graders to college students to businesspeople. According to studies carried out by Stanford University psychology professor Carol Dweck and others, volunteers with a so-called growth mindset about learning ("persist in the face of setbacks") have more brain plasticity. In other words, their noggins are more adaptable. They exhibit increases in cognitive performance compared with those who have a so-called fixed mindset ("get defensive or give up easily"). "Many people believe they have a fixed level of intelligence, and that's that," Dweck says. "The cure is to change the mindset." Certain that we're wrong? Enjoy stupidity!

I try to tell students who are feeling stumped or stymied in class that they absolutely CAN do everything that I'm teaching them. They look at me like I'm crazy and that I'm just saying that to make them feel better. But I sincerely believe that they have the power within themselves to do everything that I teach. Maybe they won't get it right there at that moment in class, but they will get it. They can. I feel like the only thing really holding them back is... themselves.

I'm still trying to figure out how to break that mental and emotional barrier in those students. I wonder if there's really anything I can do besides believing in their abilities and genuine encouragement. I truly care for each of my students, and I want them to learn and dance to their fullest potential. When they don't believe they can do something, I feel like all I can do is tell them that they can, and to give them the tools to do so. It's really up to the student to make the decision that they will work for that difficult movement or combination. As an instructor, it's my responsibility to give my students the best I can to help them achieve and learn the most they can. It's the student's responsibility to use the tools.

What's on my bookshelf...